Joss came with no drawings or other plans and if it were just a matter of setting sail that wouldn’t be a problem, but wanting to make some changes to the deck layout and to completely revise the interior layout does require something to work from. Normally such drawings would be done with AutoCAD but I don’t have a copy, and its not trivial to learn to use. What I do have and have used for years is Visio, so my drawings are all done in Visio. I hoped to find some standard templates for parts such as winches, and hatch covers but I found nothing. Even those for AutoCAD which seem to be provided by some suppliers as part of their documentation are not meant as components to a larger drawing.

Visio has some measuring items in the templates but nothing I could find to allow a line or box to be set to a given size and angle so I had to fiddle around with a shape sheet to produce these.

I’ve not attempted a lines drawing such as you get for most boat drawings instead I’ve gone for a more conventional elevation and plan.

(actually this drawing has the doghouse shape as I plan it to be, not how it is now)

This is a cross section on the line of the aft side of the doghouse. 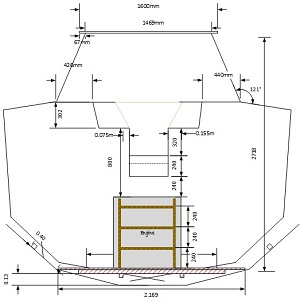